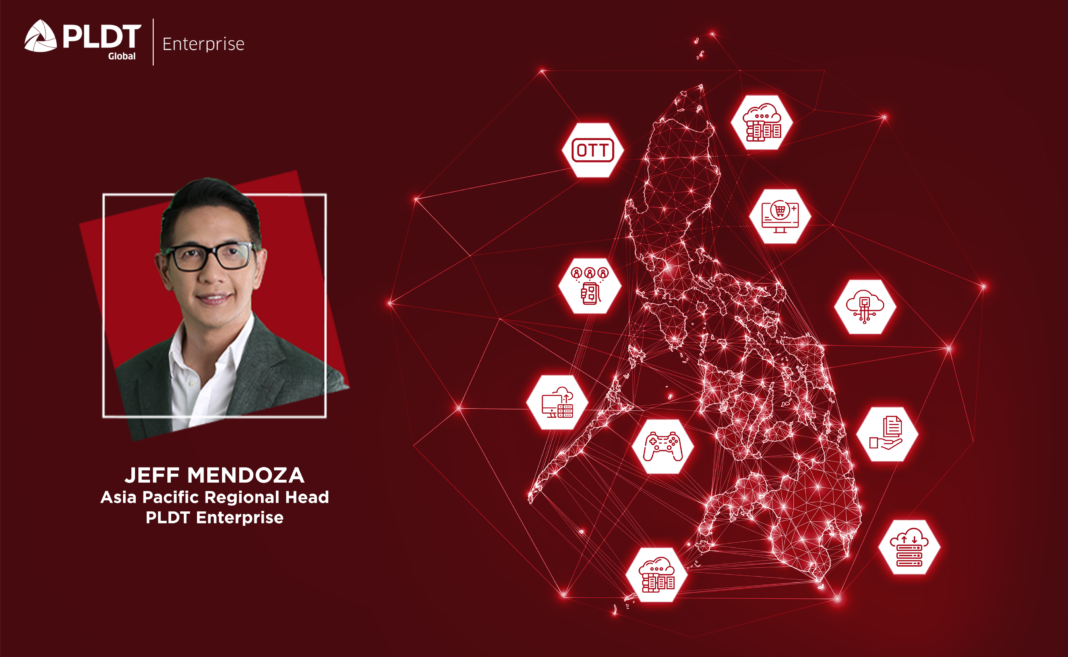 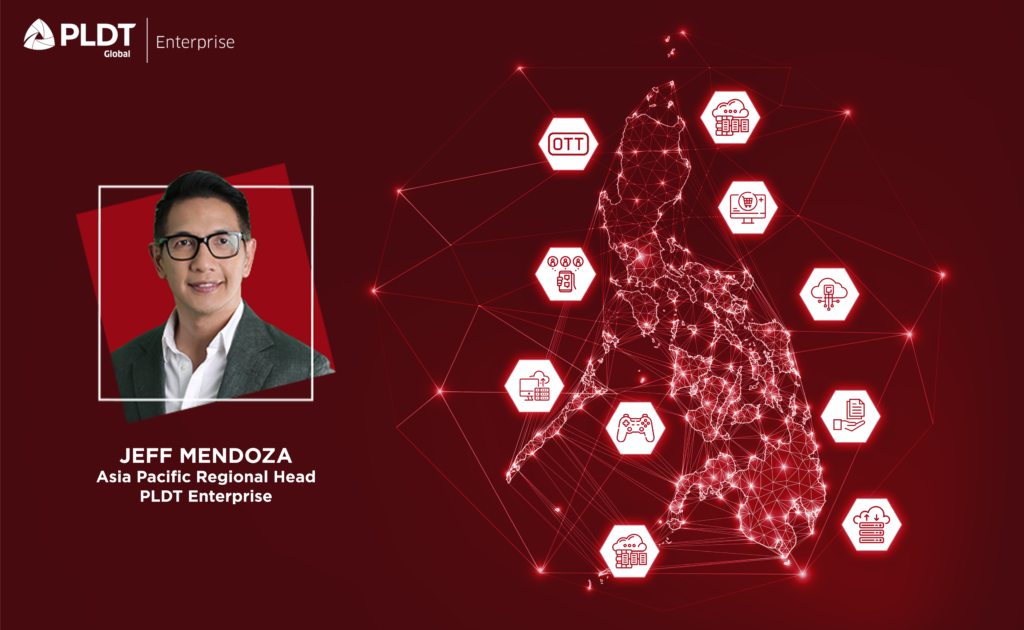 The global pandemic has been a catalyst for digital transformation as there was a steep rise in the usage of consumer applications from social media to video streaming, gaming, e-commerce, online learning, and telehealth, among others. The pandemic has also pushed the enterprise and public sector over the technology tipping point by accelerating their cloud adoption by increasingly migrating workloads to the cloud and massively using collaboration  platforms supporting work from home arrangements.

Speaking earlier this year at Asia Pacific Regional Internet Conference on Operational Technologies (APRICOT) 2021, Jeff Mendoza, Asia Pacific Regional Head of PLDT Enterprise said, “The digital transformation dictated by the pandemic among the enterprise and consumer sectors have pushed the hyperscalers in the cloud and content provider space to step on the gas with their data center deployment plans across relevant countries. The goal is to optimize subscriber experience through data server localization while enhancing network resilience in growth markets, including the Philippines.”

Digital Philippines at a Glance

The digital profile of the Philippines has motivated these hyperscalers to build their digital infrastructure within the archipelago. As these big techs strive to reign in the intensified battle of eyeballs or subscribers,  the population and the digital economy of a country are critical considerations in crafting their data center expansion road map.

According to We Are Social’s Digital 2020, the Philippines is home to the second-largest eyeballs within the Southeast Asia with a population of 109M. It has one of the youngest median age of 25.8 years old versus the average age within the region of 31.8, pointing to a sizable tech-savvy population which has stronger digital appetite and adoption to technology.

The nation also takes pride in having one of the highest mobile penetration rates in the region at 138%. The Philippines has 74M internet users with netizens spending 10.5 hours online which is the longest across the globe.

The Philippines has been dubbed as the social media capital of the world when it comes to hours spent in social media while it ranks as 6th in the list of countries with the most Facebook users.  E-commerce sales grew by USD3.6B in 2020 at a phenomenal growth rate of 43%, with projections spiraling to USD12B in 2025.

From a Cloud Service Revenue perspective, Global Data has reported that the Philippines is anticipating a steep rise in cloud service revenues up to USD2.4B by 2024. This is due to the increase in cloud spending in the Enterprise segment and the government’s Cloud First Policy which encourages and pushes the agencies to hasten their cloud adoption strategies.

The country has also been cited by the GSMA, a global mobile industry organization for mobile network operators worldwide, as an early adopter of 5G, alongside China, Singapore, and Hongkong.

Smart, the wireless subsidiary of PLDT, has launched its 5G services in key locations in the Philippines. 5G brings about denser and faster streams of data as it is driving the need to bring more efficient compute and storage power closer to the point of connectivity and the end-user. Hence, fueling a stronger demand for edge data centers.

The Philippines as an Emerging Data Center Market

The challenges confronted by major data center hubs serving Southeast Asia, like Singapore and Hong Kong, come at a time when the demand for such facilities in the region is growing. In Hong Kong, geopolitical risks out of the imposition of China’s National Security Law has caused hyperscalers in the West to rethink their strategy of building or expanding their server farms in the country. In Singapore, the government has issued a moratorium to freeze data center construction amid high demand in response to sustainability concerns. Landmass shortage was also cited as another point of consideration.

“Hyperscalers are in need of options to serve the fast growing demand within region. This is the time when the emerging data center markets such as the Philippines, is anticipated  to take advantage of this window of opportunity,” Mendoza added.

According to Structure Research, a research firm niched in the data center internet and cloud space, the Philippines is one of the emerging DC markets, having a high growth rate alongside Malaysia and Thailand.

Cushman & Wakefield, a reputed global commercial real estate services firm whose technology advisory group is also deeply connected  into  the data center ecosystem, has cited the Philippines’ DC Market CAGR of 14.2 %  versus the Southeast Asia’s growth average of 12.9% until 2024. It has been noted that SEA is the fastest growing region for co-location data centres in a span of 5 years, underpinned by the rapid pace of digitalization and surge in demand for cloud based services.

UBS sees the Philippines as an underserved market with tremendous opportunity, with strong demand from domestic and international operators. This is attributed to data localization and the demand for lower latency by the consumer and enterprise sectors.

At present, there are nine (9) existing submarine cables landing in the Philippines, with seven (7) more international cable systems upcoming. These resilient subsea cables are complemented by six (6) diverse Cable Landing Stations strategically located within the archipelago while more stations are already anticipated to be built in the next three years.

Hyperscalers are building new subsea cable systems landing in the Philippines, which highlights the importance of the country in the digital infrastructure roadmap of these tech giants.

Touted as one of the early renewables leaders in the region, with a sustainable energy mix of 24%, the Philippines strives to push for more green sources of power thru the Department of Energy’s Renewable Power Standards circular.

The government’s sustainability campaign anticipates renewable power to generate 35% of the country’s electricity by 2030. This national program is aligned with the sustainability initiatives of the hyperscalers via their respective commitments to renewable energy utilization across their operations.

PLDT has been implementing sustainability initiatives for its data center facilities that will make the most efficient approach to energy usage. For instance, its data center in Clark, Pampanga built its own solar energy source with an EIFS or Exterior Insulation Finishing System which reduces heat penetration into the building.

Possessing a burgeoning digital economy, robust domestic and international infrastructure in place, a progressive renewable power mix, and data centers at par with the technologically developed countries, the Philippines is an ideal destination to support the hyperscale data center requirements of the cloud and content providers.

“The Philippines is indeed a strong player in the emerging market space for globally certified data centers while it thrives on value creation within the digital economy. We expect in-country DC rollouts of global technology players to accelerate,” Mendoza concluded.

The country’s major data centers are primarily operated by PLDT through its ICT arm ePLDT Inc. The group currently owns a network of 10 globally certified VITRO data center facilities strategically located across the country, with a total capacity of 72MW and over 9,000 racks, designed to support the transformation and fortify the resiliency of enterprises. Since network is as essential as data center reliability, all VITRO data center facilities are designed to be carrier-neutral, allowing other telcos both foreign and local to provide network connections based on customer preference.

For more information on PLDT Enterprise and its services, visit www.pldtenterprise.com.