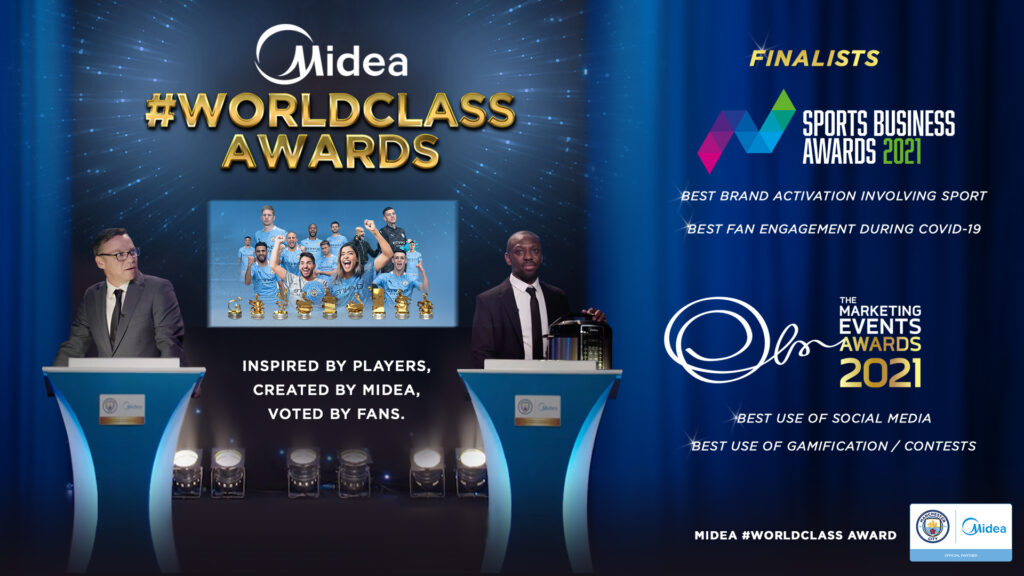 Midea and Manchester City today announced an amplification to its global partnership which kicked-off in January 2020. Throughout this partnership, Midea has produced engaging digital content, which has been extremely popular with City fans around the world. Most notably, the #MideaHomeChallenge that kept fans entertained during lockdowns when several Manchester City players challenged fans to show their football skills interacting with their home appliances in unique ways.

Also, the Midea #WorldClass Awards campaign that celebrated the Club’s, and especially players’ #WorldClass performances during the 2020/21 season. Midea’s innovative, humorous, and funny awards show, moderated by City legends Paul Dickov and Shaun Wright-Phillips, attracted millions of views and engagements from global fans when nine different #WorldClass trophies were voted on, and subsequently awarded to, their favourite City players.

This season, hand in hand with the Etihad Stadium’s new top-notch and world leading two-tier LED display system, Midea now has 12 LED slots at every Manchester City home match to showcase their extensive range of smart home appliances across all categories to over hundreds of millions global consumers and football fanatics.

“Midea’s global visibility is still fairly small compared to our ambitions. Partnering with Manchester City – awarded the most innovative sports team in the world and with their philosophy to combine playing the most attractive football to watch, with a very successful outcome – gives us great global visibility in front of over hundreds of millions of fans, and a business partner with the same high ambitions towards the future.” said Eric Wang, VP Midea Group and President & CEO of Midea Group’s International Business Division.

“There are 55,000 fans in the stadium, but hundreds of millions of Manchester City fans among the 3.5 billion football fans all around the world watching on TV and Social Media at home – and home is where we are. Hence, in Midea we are delighted to showcase our commitment and ambitions to millions and billions of fans who are enjoying football from their homes.” Wang continued.

“Here in the Philippines, we aim to show all City and football fans our wide range of smart home appliances that enable them, as our slogan states ‘make yourself at home’ to ‘feel even more @home’. Therefore, apart from bolstering our global brand presence, we are looking forward to igniting excitement to our Filipino consumers throughout the entire season and bringing people closer together, enjoying their homes even more – also especially during these still unprecedented times.” said Phillip Trapaga, General Manager and President of Concepcion Midea Inc., Philippines.

“Manchester City’s partnership with Midea has gone from strength to strength and we are delighted to further deepen our relationship. Midea has shown great understanding in how to engage with City fans around the world by producing some of our strongest performing social media content in recent seasons and we’re now looking forward to expanding this partnership into community outreach and further smart product integration.” said Roel de Vries, City Football Group’s Group Chief Operating Officer.

Midea will also extend its relationship to help support the community by partnering with the Club’s renowned ‘City In The Community’ programme, to explore ways to tackle social challenges. Over the coming months, the Club will also be integrating industry-leading Midea smart home appliances across the Etihad Campus to provide enhanced facilities for players and fans alike.