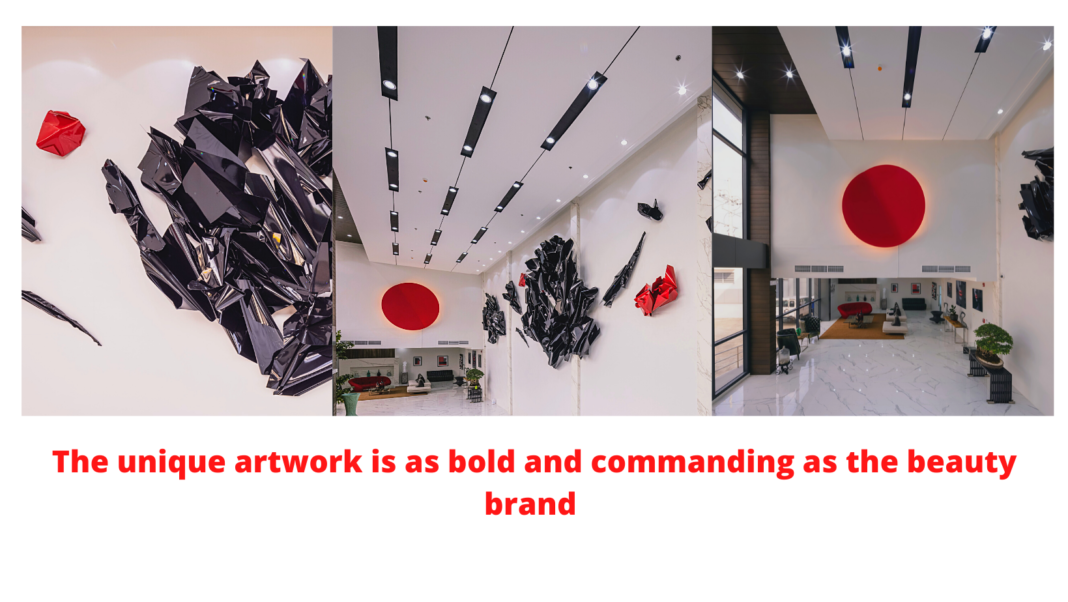 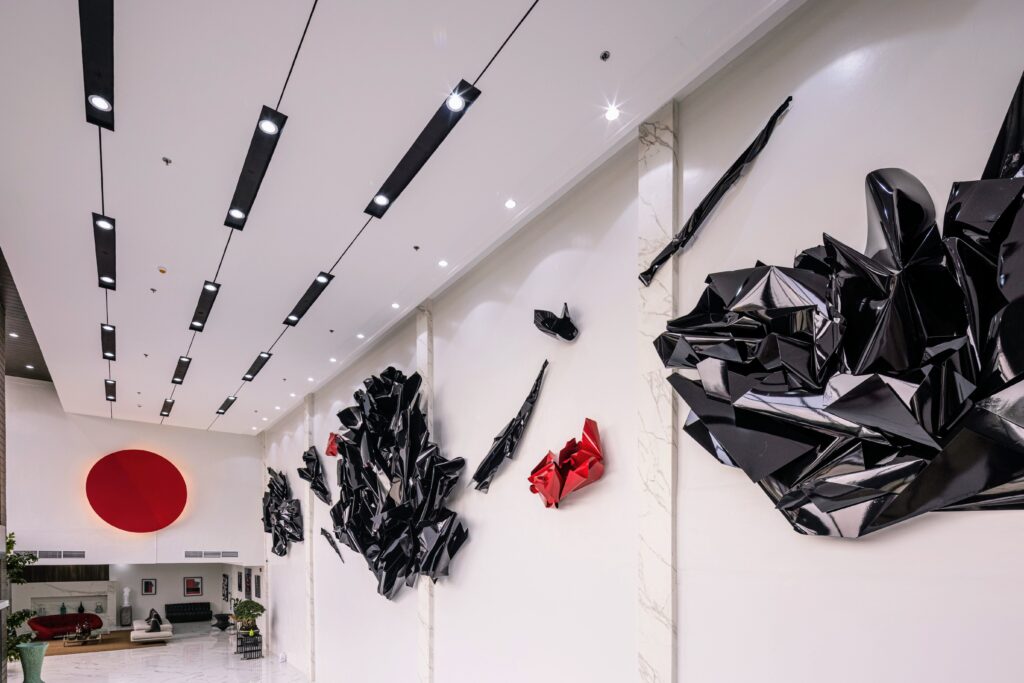 The latest striking artwork at one of BEVi Group’s manufacturing plants in Alaminos, Laguna is the massive, multi-piece metal sculpture mounted on the wall of its main lobby. Created by modern Filipino visual artist Jinggoy Buensuceso for the 15th anniversary of Kojie.san, the artwork is very much a representation of the boldness and commanding way this beauty brand has made an impact on the industry, starting with a bar of soap and a then-unfamiliar main ingredient.

Providing a stark contrast to the serene white space that it occupies, Jinggoy’s sculpture Okurimono, features dramatic distortions reminiscent of crumpled pieces of paper in arresting shades of black and red. A single and striking large red circle sits alone on the opposite wall. Lovingly named Red Moon by the artist, the piece is a silent and steady witness to the dynamism of Okurimono.

The work is a testament to the artist’s skill and mastery of the medium, able to manipulate it exactly as he envisioned. It also fittingly reflects the remarkable brand that served as his muse, Kojie.san, and how it forged its own success by creating and commanding its own path.

Game changer. Kojie.san started in 2006 as a pioneer of soap with kojic acid as its active ingredient. It’s highly recommended by dermatologists for its efficacy in evening out the skin, gently erasing age spots, scars, and sun damage. However, the brand came at a time when the market was already saturated with over 40 whitening brands vying to be the best in the category. Despite this, Kojie.san was undaunted, challenging the norms then and faced the competition head on. This was the audacity and originality that drew fans in.

Through the dedication of its founder and CEO Jazz Burila and its loyal following, the brand survived and thrived, eventually reaching 15 years of growth and success. The beauty brand’s milestone is the reason behind Jinggoy’s creation that captured Kojie.san journey of carving a path of its own.

Commanding beauty. Okurimono is not just a reflection of Kojie.san’s journey to success, but also of its brand philosophy on beauty and what it stands for. Proudly proclaiming this, Kojie.san officially launched Command Beauty in 2019, to encourage women to create their own definition of beauty instead of letting society set the standards for them.

For many years, women have been limited to what others tell them about what being beautiful is, but today, beauty can mean many things – beauty means diversity and democracy. It can mean what you want it to mean. You can define it based on your own understanding, inhibitions and experiences—just like art.

“Art speaks to your inner self, you define it based on your own understanding, inhibitions and experiences. There’s no single way of appreciating an art piece, in the same way that Kojie.san believes that there is no single way to be beautiful. In fact, you should create your own definition,” says Jazz. “This is why I feel Jinggoy’s work is the best representation of Kojie.san.”

If Okurimono is the brand, Red Moon is the Kojie.san woman. One who commands beauty, who takes control, and who is steadfast in defining her own worth – exactly as Kojie.san the brand has done 15 years ago and will continue to do so.

Get exciting updates and information at @KojiesanPH on Facebook and Instagram and www.kojiesan.com. Kojiesan is available at all leading supermarkets and drugstores nationwide, as well as Kojiesan’s official LazMall on Lazada and Beauty MNL.