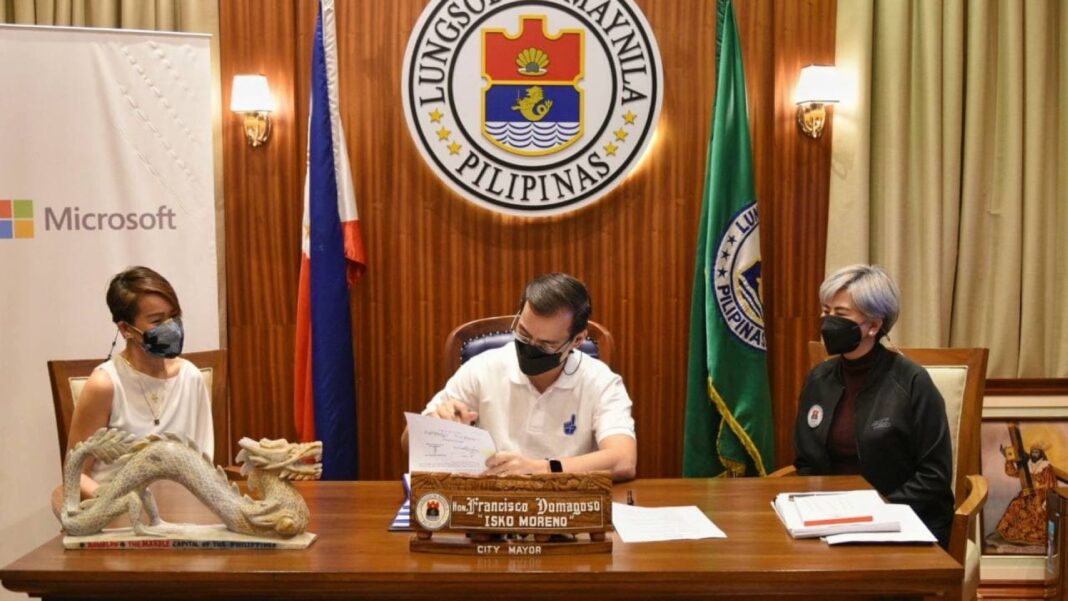 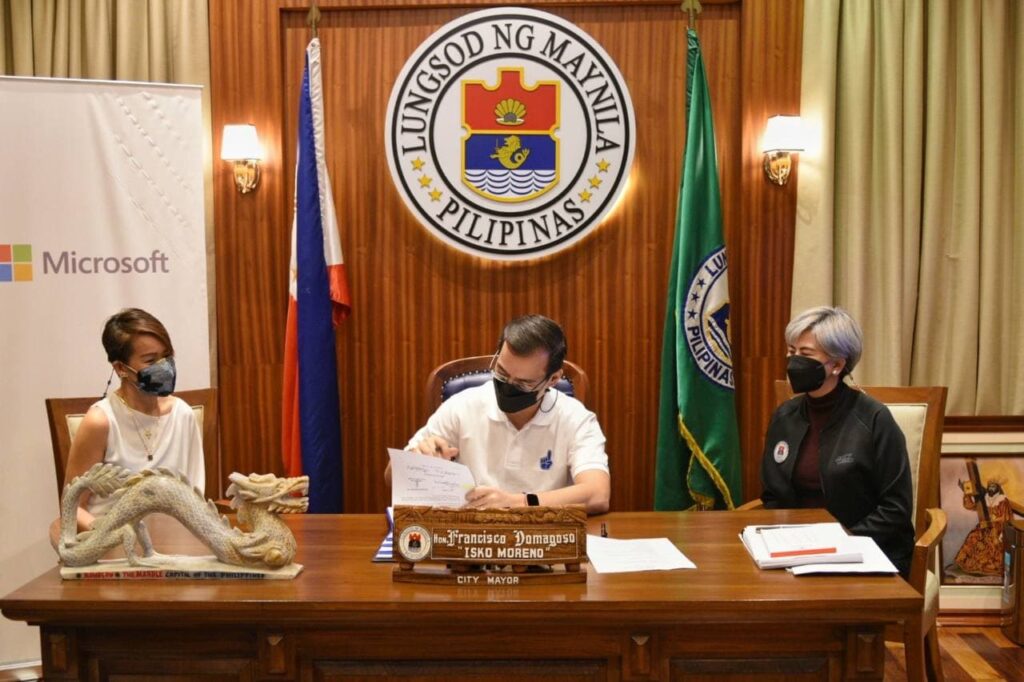 The City of Manila and Microsoft today began a partnership agreement to drive innovation and accelerate digital transformation in the Philippines capital city, potentially empowering more than two million citizens for the digital age.

“Our collaboration with Microsoft – a global leader in software, education, enterprise, digital and cloud technologies – accelerates our ambitions to build a 21st century economy that lifts up our poor, improves job opportunities for our middle class, enhances how the City Government of Manila works internally and improves how we will deliver services externally and enhances our overall business and investment-friendly attractiveness, especially as we seek to recover from the worst of the Covid-19 pandemic,” said The Honorable Francisco “Isko” Moreno Domagoso, Mayor of the City of Manila.

Digital transformation has been at the heart of Mayor Domagoso’s administration. Upon taking office in July 2019, he discovered Manila lacked baseline data sets for population, family size, income, education, etc. Thus, Mayor Domagoso’s first act as Manila’s 27th Mayor was to promulgate Executive Order No. 1, The City of Manila Open Governance Ordinance, which created a broad policy foundation to support automation and computerization of city processes, accelerate digitally-driven data gathering and introduce technology advancements across all governance streams, to improve Manila’s ability to deliver services to its estimated 2-million plus population.

“City governments today have an opportunity to better serve their citizens through the power of technology. Artificial Intelligence, the Cloud, and Data can all be harnessed to increase efficiencies and improve everything from public safety, transportation, infrastructure and citizen services,” said Andres Ortola, Country General Manager of Microsoft Philippines. “The City of Manila has taken on an enormous challenge in their ambition to become a smart city and we look forward to working closely with them to support their transformation efforts and hopefully, to inspire and assist other government units and agencies across the Philippines as well.”

In June 2021, the City of Manila was named among 50 Finalist Global Champion Cities in the Bloomberg Philanthropies 2021 Global Mayor’s Challenge, the world’s most prestigious competition for urban innovation for cities of 100,000+ population. Manila’s entry to the competition, “Go Manila” seeks to build the first, holistic, digital data infrastructure by any Philippine city, large or small.

The partnership between the City of Manila and Microsoft substantially advances the ambitions and goals for the Go Manila initiative, across three broad partnership workplans:

Presently, the City of Manila is engaged in a prototyping exercise to create digital IDs for every one of Manilas 2-million plus residents, with an initial focus on the estimated 350,000 poorest and most at-risk or vulnerable populations. Many of these individuals do not possess formal identification and without such, cannot apply for a Philippines national ID. The City of Manila digital ID is designed to empower these most vulnerable persons even if they do not possess a smart device and enable them to register for benefits, education, job training, cash support, and much more. Microsoft is prepared to support the widespread build-out and roll-out of this transformative initiative.

Additionally, in partnership with the Philippines Department of Education, Manila’s 290,000 public-school students will be provided free email addresses and free Microsoft 365 accounts, equipping them with the vast abilities that Microsoft applications offer and giving access to Microsoft’s global education programs to help students adapt to a rapidly changing learning environment. Manila residents will also have the opportunity to learn new digital, in-demand job skills through Microsoft’s skilling platforms such as LinkedIn, Github, MS Grounded, and much more.

To enhance productivity, collaboration, and flexibility among Manila’s civil servants, Microsoft will help transition Manila’s LGU to a modern workplace. Microsoft and the City of Manila are presently engaged in a trial exercise to provide Microsoft Workplace to the City’s leadership team across all 54 of its executive departments. Both Microsoft and Manila will conduct extensive internal training sessions to upskill City leaders on the new digital platform, to help improve inter-department collaboration, foster greater work efficiency and improve services delivery to Manila residents, investors and visitors.

The partnership will seek to further optimize the city’s “Go Manila” platform, a whole-of-city digital data infrastructure initiative and wherever requested by the City of Manila, enhance data governance policies. Microsoft will provide access to Government-specific resources and expertise in Artificial Intelligence and map horizons for future digital plans.

Manila and Microsoft, partners for success

“To govern a modern global city in 2021 – especially through the worst public health and economic crisis of our lifetimes – demands we think, lead, manage and govern in new ways,” added Mayor Domagoso. “That is why we are truly excited for the prospects of our partnership with Microsoft and in the 450th year since Manila’s founding in 1571, we look forward to our mutual collaborations ahead.”

“Creating smarter cities is more than just about devices and sensors. It’s about creating an environment that allows every citizen to connect with the city and the city with every citizen. We work with local and national government agencies all over the world to achieve that outcome and we’re committed to its attainment for the City of Manila and every city across the Philippines,” added Country General Manager Ortola.